I've been working on a major organizational project for a few weeks - sorting my printed photos.
First came the hunting & gathering, then the decision on the catalog criteria.

Once sorted by era (ancestors, my life until living outside of my parental home, early married life before children, our family years, empty nest to current) I am attempting to put them in simple albums chronologically for now, but some stories are begging to be told.

This newspaper article surfaced at the same time the photo did,
so with my CKC July "Beautiful Maggie" counterfeit kit it was easy-peasy.
I chose the Webster's Pages "My Happy Place"/Sunshine paper as the story is a move to Florida.
I had a long story to tell so I slipped the clipping into an archival sleeve & treated it
like a pocket page. My story was formatted to fit into the space on the reverse. 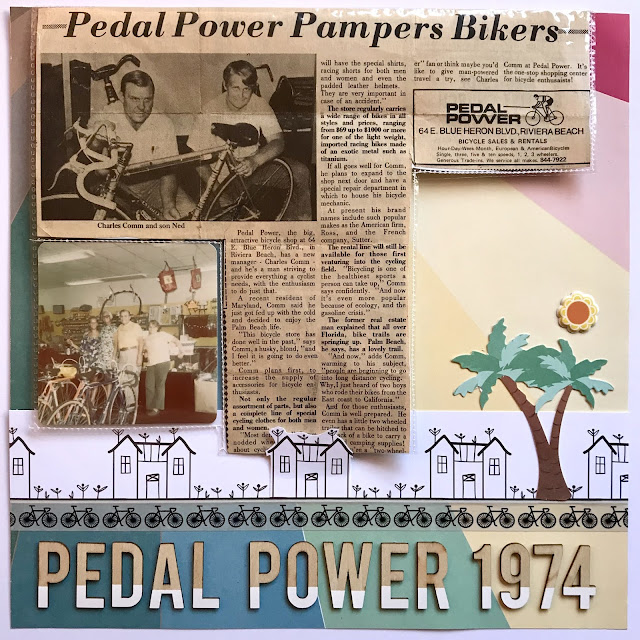 I left my original hand-written note on the back of the photo visible. 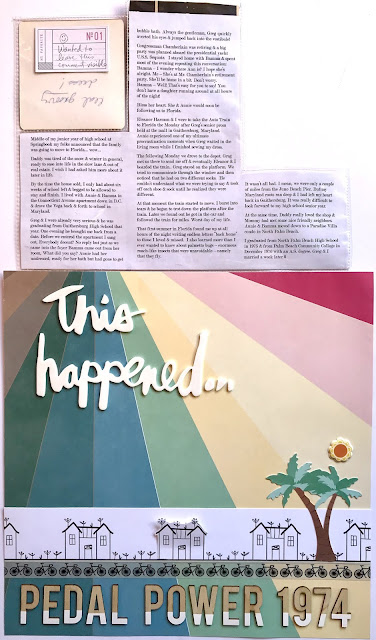 Daddy was tired of the snow & winter in general, ready to ease into life in the slow lane & out of real estate. I wish I had asked him more about it later in life.

By the time the house sold, I only had about six weeks of school left & begged to be allowed to stay and finish. I lived with Aunie & Bamma in the Connecticut Avenue apartment down in D.C. & drove the Vega back & forth to school in Maryland.

Greg & I were already very serious & he was graduating from Gaithersburg High School that year. One evening he brought me back from a date. Before we entered the apartment I sang out, Everybody decent? No reply but just as we came into the foyer Bamma came out from her room, What did you say? Aunie had her undressed, ready for her bath but had gone to get bubble bath. Always the gentleman, Greg quickly averted his eyes & jumped back into the vestibule!

Congressman Chamberlain was retiring & a big party was planned aboard the presidential yacht U.S.S. Sequoia   I stayed home with Bamma & spent most of the evening repeating this conversation:         Bamma – I wonder where Ann is? I hope she’s alright. Me – She’s at Mr. Chamberlain’s retirement party. She’ll be home in a bit. Don’t worry.  Bamma – Well! That’s easy for you to say! You don’t have a daughter running around at all hours of the night!
Bless her heart. She & Aunie would soon be following us to Florida.
Eleanor Harmon & I were to take the Auto Train to Florida the Monday after Greg’s senior prom held at the mall in Gaithersburg, Maryland. Aunie experienced one of my ultimate procrastination moments when Greg waited in the living room while I finished sewing my dress.

The following Monday we drove to the depot. Greg met us there to send me off & eventually Eleanor & I boarded the train.. Greg stayed on the platform. We tried to communicate through the window and then noticed that he had on two different socks.  He couldn’t understand what we were trying to say & took off each shoe & sock until he realized they were different.
At that moment the train started to move. I burst into tears & he began to trot down the platform after the train. Later we found out he got in the car and followed the train for miles. Worst day of my life.
That first summer in Florida found me up at all hours of the night writing endless letters “back home” to those I loved & missed.  I also learned more than I ever wanted to know about palmetto bugs – enormous roach-like insects that were unavoidable – namely that they fly.


It wasn’t all bad. I mean, we were only a couple of miles from the Juno Beach Pier. But my Maryland roots ran deep & I had left my heart back in Gaithersburg. It was really difficult to look forward to my high school senior year.
At the same time, Daddy really loved the shop & Mommy had met some nice friendly neighbors. Aunie & Bamma moved down to a Paradise Villa condo in North Palm Beach.
I graduated from North Palm Beach High School in 1975 & from Palm Beach Community College in December 1976 with an A.S. degree. Greg & I married a week later.
Posted by LCSmithSAVED at 10:36 PM